Memories, a visit to the Archeology Museum

Reminiscences from a visit to the Archeology Museum

This post is a transcription of a series of un-edited Toots, a conversation in the Mastodon network in December, 2019. It was motivated by a series of Toots earlier that morning, posted in sucession by Anarchiv, @anarchiv@todon.nl.

I am grateful to him for his great story telling in a new medium, which reminded me of an experience I described later that same morning; in my own series of Toots.

And now here, in a blog post format, richer with added formatting and more references, images. Hope you enjoy reading it.

It started this morning, the thread. And over short posts, someone told a story. Of a Greek man, who lived in antiquity, by the Mediterranean side; in a city whose name is still preserved, and today is written “Marseille”.

This series of posts was interesting, I caught one flying by the Local feed, about halfway down his sequence, liked it and went to the top to find the rest.

Enjoying his post, I remembered similar thoughts, of History, and how things worked, how small bits and pieces came to me as I visited an exposition, at the Archeological Museum, in Lisbon. (click image for larger size) 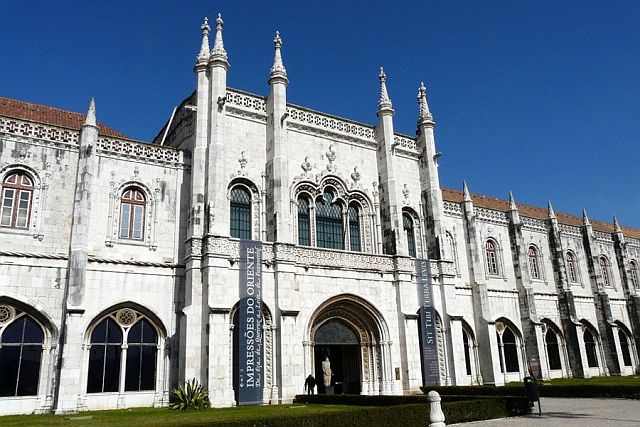 Stopping at each display, I would read and examine the artifacts. All of them had came from the same region, countryside around today's city of Loulé, in the Algarve, Southern Portugal.

The region has been inhabitted for thousands of years, and the exhibit had pieces from pre-historic, Phoenician, Roman, Moorish and more modern times.

The Algarve is the most Southern part of Portugal, the warmest and sunniest. Trees, fruit, grapes grow well there. Fish in the seas are plenty. It was good land for settlements. 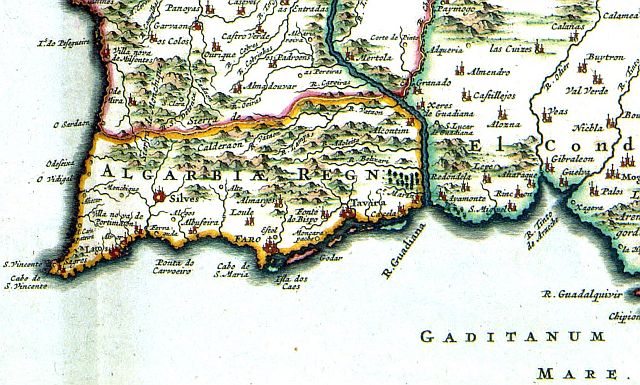 And they came, different peoples over different eras. Phoenicians, traders at heart, created outposts to explore the land and it's products, while also supporting passing seafarers going to farther places. Some of their mariners came from the homeland in modern day Middle East, traversed the whole Mediterranean, and went past the Columns of Hercules, now Gibraltar, into the open Atlantic.

Wild ocean waters, for people with small ships, but brave they were; and the profits from trading moved them. From home, via this route, into the Bay of Biscay, always a dangerous passage, and on to Cornwall for the Tin metal so demanded by the Bronze Age technology. Tin was plentiful there, and provided profitable mining for thousands of years. Traders came from far an apart to purchase the ore and bring it home for resale.

In the Algarve, Phoenicians, Romans set up colonies. The Romans saw the abundance of fish and built an industry of processing then into a preserve, the “Garum” fish sauce which was popular in their cuisine. Garum produced in the region was high quality, and had a demand from various regions of the Empire, including the Capital, Rome itself. (click for larger image) 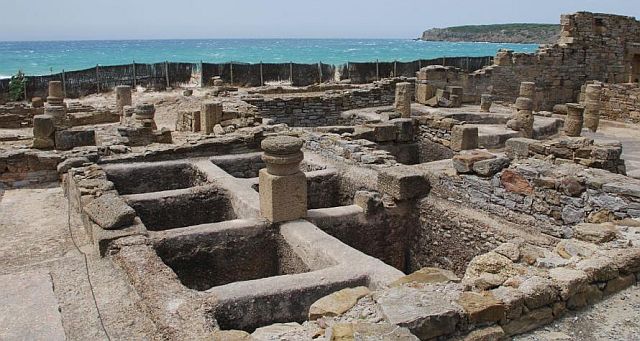 Garum was created by cutting up the fish and placing them into stone vaults cut into the local bedrock. Salt was added as a condiment but primarily as a preservative agent. The salty fish mix was left on the stone vats to cure for some time, months possibly. And once finished, it provided a concentrated sauce with protein and a flavour judged exquisite by the people.

Quality brings demand, and demand attracts traders; there's money to be made and livelyhoods could focus on supplying it.

The Museum showed photos of the larger artifacts, like these stone vaults, carved into natural rock. They showed site maps with pointers of what each part was intended to do. Once you have a product, and an eager market, things will work to get it supplied.

How do we carry this out? The Museum showed many Amphorae, large earthware/ceramic vessels which were built to store and carry various products around, localy, regionaly and along longer routes to Rome and Beyond. (click for larger image) 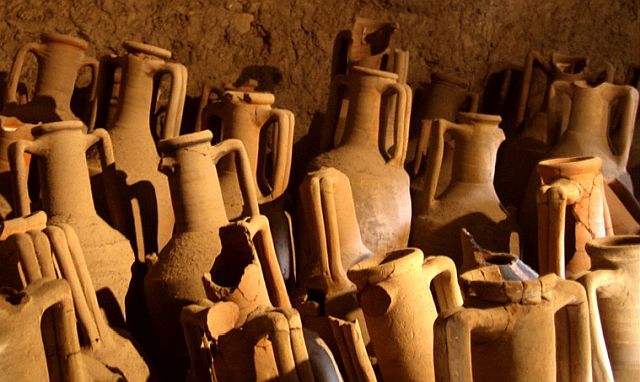 During the Roman era, there were thriving colonies not only in Lusitania, today's Portugal, but also in the Southern region of today's Spain now called Andalucía, which came from the Moorish era name – Al Andalus.

Roman estates in the Andalucia region, then called Baetica, produced fine Olive Oil, another staple of the Mediterranean diet. They sold and exported this widely, quality bringing in demand and profits to traders, farmers and landholders. Baetica was 'next door'to the Algarvians, so trade flowed easily between them. 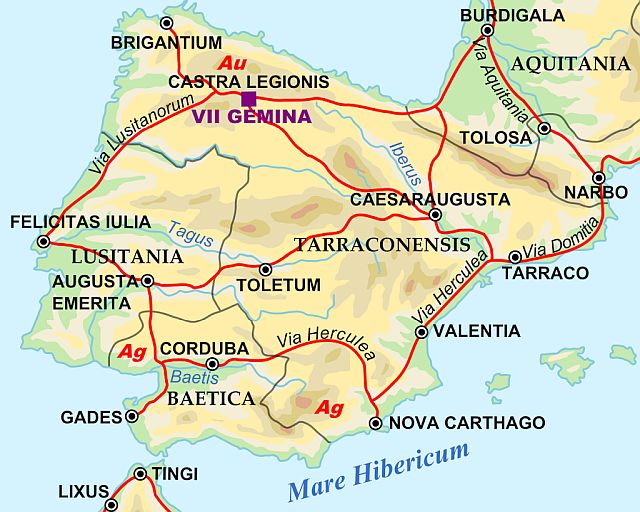 As documented by the various amphorae, eithe whole or in fragments, on display at this Museum exhibit. The notes pointed out how many Baetican amphorae had been found in the Algarve, testimony of vigorous trade. Algarvians had income and could purchase finer goods – their own region produces olive oil and wines to this day, but the Museum had fragments which had been manufactured in Baetica, and even in mainland Italy, Rome's homelands.

Algarvian amphorae fragments had cruder handles and rougher surface texture. The Baetican ones were finer and prettier ceramics. Past contents of these vessels could still be determined by analysis of residues in some of them.

I should point out that I am not a Historian, but a curious man, fascinated by glimpsing the past and being able to understand a bit of how they lived, by seeing such a nice exposition and the numerous Historical buildings, sites and ancient settlements commonly found in Europe. So, my writing probably has factual errors, which I apologize for, the intent being to jot down those and share with others who might find them intriguing, hopefully.

The collection on display was all dug on sites around the modern city of Loulé. Besides these wonderful Roman and pre-Roman era artifacts, they also had later, Moorish period ones, with beautiful ceramics and metal work.

After visiting Europe for the first time a few years ago, I was so impressed and pleased by all these cultural artifacts and History around everywhere that traveling here in my home region, in Norht America pales in comparison.

I hope you enjoyed this narrative, and welcome your comments and follow ups. Thank you.

The National Museum of Archaeology (Portuguese: Museu Nacional de Arqueologia) is the largest Archaeological museum in Portugal and one of the most important museums in the world devoted to ancient art found in the Iberian Peninsula. Located in Lisbon, the museum was founded in 1893 by the archaeologist José Leite de Vasconcelos.

The museum is the most important centre for archaeological research in Portugal. The museum was given the international “Genio Protector da Colonia Augusta Emerita” prize, awarded by the Foundation for Roman Studies and the Friends of the National Museum of Roman art in Mérida, Spain.[3] Museum Official Site Wikipedia page

Human presence in the territory of Loulé remotes to the Later Paleolithic. The growth of the settlement of Loulé likely stemmed from the late Neolithic, when small bands began rotating agricultural crops and herds around numerous subterranean cavities in its proximity (specifically around Goldra, Esparguina and Matos da Nora). Within the following millennium, the settlements began to grow and intensify with spread of Mediterranean cultures, that progressively penetrated the southwestern part of the peninsula. This culminated in the arrival of the Phoenicians and Carthaginians, who founded the first trading posts along the maritime coast, increasing fishing, prospecting for minerals and commercial activities.[4] Wikipedia page City of Loulé, Bing Maps

An amphora is a type of container of a characteristic shape and size, descending from at least as early as the Neolithic Period. Amphorae were used in vast numbers for the transport and storage of various products, both liquid and dry, but mostly for wine. They are most often ceramic, but examples in metals and other materials have been found. Versions of the amphorae were one of many shapes used in Ancient Greek vase painting. Wikipedia page

Garum was a fermented fish sauce used as a condiment in the cuisines of ancient Greece, Rome, Carthage and later Byzantium. Liquamen was a similar preparation, and at times they were synonymous. Although it enjoyed its greatest popularity in the Western Mediterranean and the Roman world, it was earlier used by the Greeks. Wikipedia page

Small fish are covered with salt, spread out in the sun and turned from time to time. When they have been completely fermented they are scooped into a fine-meshed basket that is hanging in a vase. The liquid that seeps into the vase is liquamen. cited on Coquinaria NL Take a smell walk into the past – anyone for Garum?

Lusitania or Hispania Lusitana was an ancient Iberian Roman province located where modern Portugal (south of the Douro river) and part of western Spain (the present autonomous community of Extremadura and a part of the province of Salamanca) lie. It was named after the Lusitani or Lusitanian people (an Indo-European people). Wikipedia page Roman Empire map, 3rd Century

Hispania Baetica, often abbreviated Baetica, was one of three Roman provinces in Hispania (the Iberian Peninsula). Baetica was bordered to the west by Lusitania, and to the northeast by Hispania Tarraconensis. Baetica remained one of the basic divisions of Hispania under the Visigoths down to 711. Baetica was part of Al-Andalus under the Moors in the 8th century and approximately corresponds to modern Andalusia. Wikipedia page

Al-Andalus, was the name given by Muslim sources during the Middle Ages to the territory in the Iberian Peninsula culturally and religiously linked with them. At its greatest geographical extent, it occupied the northwest of the Iberian peninsula and a part of present-day southern France, Septimania (8th century), and for nearly a century (9th–10th centuries) extended its control from Fraxinet over the Alpine passes which connect Italy with the remainder of Western Europe. Wikipedia page

In 711 an invasion by the Islamic Umayyad Caliphate, comprising Berbers from North Africa and Arabs from the Middle East plus other Muslims from all around the Islamic world, conquered the Visigoth Kingdom and founded the Islamic State of Al Andalus. The Umayyads reigned supreme and advanced through Iberia and France until the Battle of Tours (732) but endured across Iberia until the fall of the Kingdom of Granada (Spain) in 1492. Wikipedia page

The history of Portugal can be traced from circa 400,000 years ago, when the region of present-day Portugal was inhabited by Homo heidelbergensis. The oldest human fossil is the skull discovered in the Cave of Aroeira in Almonda. Later Neanderthals roamed the northern Iberian peninsula. Homo sapiens arrived in Portugal around 35,000 years ago.

Pre-Celtic tribes such as the Cynetes lived in the Algarve and Lower Alentejo regions before the 6th century BC, developed the city of Tartessos and the written Tartessian language, and left many stelae in the south of the country. Early in the first millennium BC, waves of Celts from Central Europe invaded and intermarried with the local populations to form several ethnic groups and many tribes. Wikipedia page High Resolution Map of Iberia