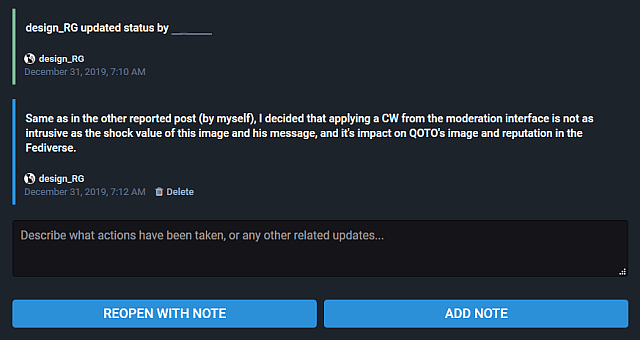 On the issue of rules regarding content warning and posting in timelines.

We had some disturbing photos posted recently at a Mastodon instance where I am part of the staff and a Moderator. I flagged some of the posts for moderation, and waited to see what the response from other mods and admin would be; it came and wasn't in line with my thinking, exactly.

I had joined a new instance very recently, and as requested by the administrator's welcome message sent to each new user, went to read their Rules page. Liked what I saw; it was well written, in clear terms and organized into different types of possible objectionable posts contents.

That instance is Masto.donte.com.br, Renato Londe's instance. You can see their “About, More” page in the original (Portuguese language), or for ease of understanding, a clean Bing Translation to English.

Just this morning, as I reflected and made notes for this post, I looked at them once again – and some of the objectionable content I flagged would be clearly within their definitions of not allowable content at their own instance.

Sanity prevails, even if sometimes rules have to be extensive and worded carefully to avoid misunderstandings.

About a week ago or so we had an incident which took me sometime and attention – I recall now it was on Christmas Eve, exactly, as I found that ironic considering the nature of the incident.

Someone posted a thread with a screenshot and a request for De-federation (isolation, incommunicado) of an instance. Mine, as I discovered upon reading, just by sheer luck, one of the replies to her post as it flew by in the busy Home timeline. 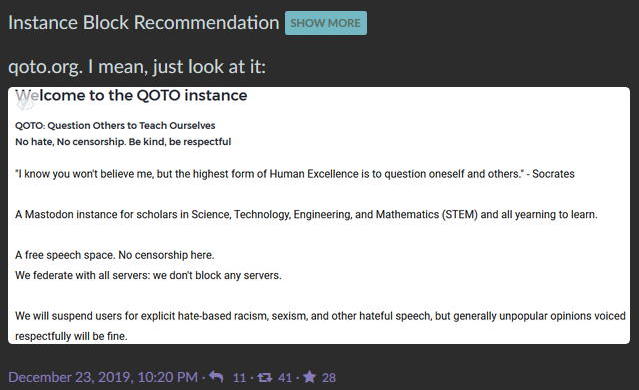 Being an active user at my instance, I had made many posts and did my best to build community; that someone could make that harsh request was shocking to me, and I went into the fray soon after reading. First thing, I posted an exposé of what was going on in our own instance's Local timeline – to allow anyone interested to follow and intervene in the discussion if desired.

Then went on to replying in their own thread, much to the chagrin of the post's author, who did not expect a reaction. Oh, Really? lol...

This took energy and attention away from other tasks, but was important to me at that moment.

To be ostracized like this request indicated would be disgraceful to any Fediverse instance. Look at Gab and what people think, that's their current situation, isolated in their own corner.

The intent of today's blog is not to re-open the issues raised in this thread — But it might inform some of my thinking, which was further aided by private DM discussions once the fires where out, with a good friend from another instance. A cool one, which I joined simply by meeting some of their members and liking their ways.

So, back on topic – the main implication of the huge discussion here was the way a community can be perceived, by the looks of :

Our own Instance Rules :

Below is a copy of the screenshot that DK posted, and was captured from this page – Qoto.org – About, More.

And upon later DM chat, I agree that we need to do some revisions. The pages are important, as they present publicly where the administration and staff of a community stand, their beliefs and how they plan to deal with infractions or problems.

Upon just going back now and re-reading, I recall a certain skepticism upon reading them when I first joined. Qoto was my entry point into the Fediverse, the first place I found, via the JoinMastodon.org and their Get Started (instance referral page).

Now I have been in the instance for almost two months, but these have been intensive, full days where I explore and discover not only local content but also other instances; other services like this very blog; read and learn, apply what I just learned. And have fun doing it!

The first impression was that the tone of the text and rules was a bit too Libertarian for my taste. But that soon melted with getting to know and enjoying interactions with the locals and people in other instances, who either replied and participated in our threads, or that I met at the Home feed, less busy and more manageable that the waterfall of content in the Federated timeline.

This might be a good way to start my reflections on what could we improve in the About page, and posting this could help clarify my thinking to others.

Moderation on the Day to Day :

I volunteered to help with the moderation in the instance, something I have done and enjoyed in the past.

For me the most important part of a site staff member is not the policing and containing of problems if they do pop up, but tho be an active member of their community and lead by example. I made an extensive post, first on the Discourse Forum, then later copied over to my blog here, describing my thoughts and philosophy. 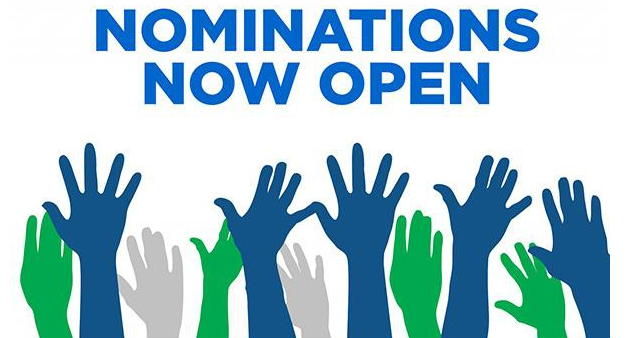 It was quite a bit of work, but I enjoyed it, and thought it could help inspire other users into supporting and helping build a community — they are nothing if there's no user participation, or if it drops in reaction to some incident or another.

Then yesterday we had two new users, just joined post some images I felt were disturbing, for different reasons. Not a god way to start in a new community you join, and I was concerned by the perception of those in the Fediverse at large – when there's already animosity as detailed in the long discussions with DK and cohorts.

Report it, report it!

...Is what we tell everyone, and the best way to act promptly on any bad actors. We might not be online, or deep into participating in some thread, doing other work in the computer, etc. But a user Report will do a few things:

These two images spooked me; upon thinking, I decided to report each post, but not act to let other staff people look at them and opine on course of action to follow.

Waited for some time, and now, the next day, went to see the status. 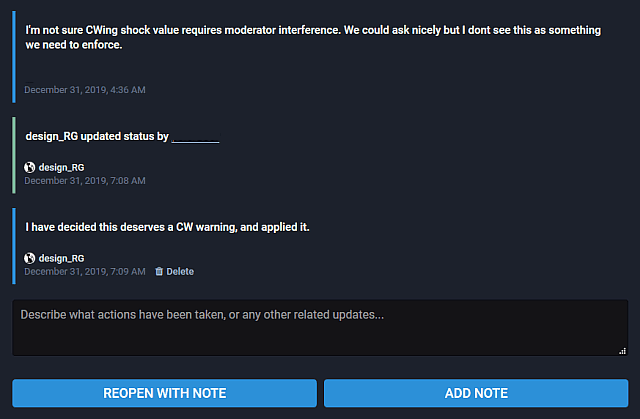 There were notes left, one in each case, suggesting contacting the users in question and asking them to change the images by adding a Content Warning, CW for short. Looking at the controls, I saw I had the option of adding the CW myself, and as a staff person concerned with instance's perceived nature, felt justified in doing so.

The snapshot above shows the logged actions as they appear on the case, now closed.

I edited each image, removing user names and any identifiable particulars, other than my own username, which is used here in the signature of every post, so no secret.

How bad were they ?

I felt they were bad, in different ways.

The first one was an illustration of a maniacal man, one that had a huge impact in the 20th century. Would annoy many with fixated eye contact it contains. A copy of it is stored here (external link) if you want to see it.

The second one shows a predatory attitude, a man armed and showing a dead animal he had just murdered. A copy of it is stored here (external link) if you want to see it.

Under Renato's Mastodon instance rules, these would not be acceptable, and removed immediately. Possibly consequences might come to the user, who is warned at the front door, even before joining, that the community is a moderated instance, and that the rules page listed here apply if they want to request membership.

Another two images followed, which I have qualms about, but both were posted by staff members and I declined to act or report on them for that reason.

Other than deciding this was the right time to create this post, which ties up different things and will propose we start a discussion and revision process on the currently displayed “About, More” rules page at Qoto.org.

Upon going out to gather links, images and references for this post, I noticed that DW's original Instance banning thread, now one week old, has 41 Boosts as of earlier this morning, Dec 31, 2019.

So there's a sentiment, there's hostility, and should we not worry and ignore it? That's not my nature, and I see some of the reasons for their concern, so as promised to my friend in our Direct Messages dialogue, I am starting this. Thank you, for helping me and inspiring continuing action, mon ami.

Happy New Year, Fediverse, communities who accepted me, friends I have met through them, thank you all for enjoyable times and the intense intellectual stimulation our interactions brought me.

Thank you for reading this, please feel free to comment about this post, your input is important. This page created entirely in MarkDown language.